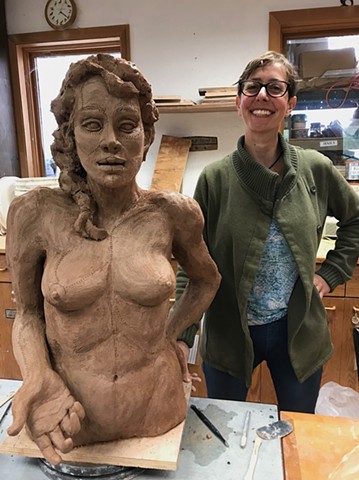 Most of my life, I have been a reluctant artist. That is to say, that I mostly defined myself in other terms: a high-achieving student, a Spanish teacher, a world-traveler, a cancer survivor. Yet my artistic pursuits always hovered on the periphery, demanding that I create or suffer negative repercussions to my mental health. For me, that is the definition of an artist: someone who is driven to make art to be well in mind and body.

I had always been attracted to figurative work and when I relocated to the Portland, OR area from Ventura County, CA, I began to study sculpting the figure. I quit my teaching job for two years to substitute teach and take Figure Sculpture at Portland Community College Rock Creek with Ben Buswell. I also took private workshops with master figure sculptor Jim Gion.

When I was diagnosed with Hodgkin’s lymphoma in my early thirties, my priorities realigned. Because I had very little energy during treatment, I was forced to choose just one thing a day that I could accomplish, be it attending an appointment or spending an hour in my studio. It became more clear to me the priority I wished to place on my developing as an artist.

My current work reflects a creative process taught to me by artist Sara Swink. Each winter since cancer treatment, I take her workshop again and create a giant college that translates the year’s emotional journey into imagery dictated by my subconscious. I draw on the subsequent image journal throughout the year, sculpting and glazing first small maquettes then larger pieces.

My most recent work comes from an image journal created a little over a year after my beloved father’s death and months after the discovery of three new half sisters through the miracles of online genetic testing. My father had been a sperm donor in the early 80’s but no records were kept, so only now in the age of $99 DNA testing and online databases could I find my siblings. One sister was born the same week as me in the same tiny hospital in Ojai, CA. Though we first met in our mid thirties, the instant bond we have felt reinforces the idea that we are each other’s “long lost twins.” Also, we are coincidentally both Geminis. I am childless and she has four children. Through my work, I am processing new notions of family and the profound push-pull ambivalence I feel about becoming a mother myself.

In July- September of 2019, I participated in an artist residency program in Puebla, Mexico, called Arquetopia. My proposed project there was to explore ideas around duality by creating a series of figures inspired by the Tlatico figurines, which are tiny pre-columbian figures featuring bifurcated heads or faces. My work there evolved and became inspired by other pre-columbian pieces, including layered masks. As a young adult cancer survivor, I am fascinated by themes of mortal fragility and the cyclical nature of time.